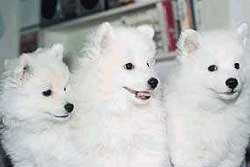 Niche Spitze - is the way one could describe the Giant-Spitz. It was always specific qualities together with the appropriate size and colour that the different Spitzbreeds were bred for and ensured that they continued for hundred of years.

For the Giant-Spitz it was its ability to guard and protect, its excellent hearing, its loyalty, its guarding qualities and its mistrust of strangers. All these qualities were highly rated by their owners.

White Giant-Spitz
In the last centuries the small and middle size various of the Spitz were mainly owned by the lower classes. The white Giant-Spitz was an exception to this, its larger size and elegant looks bringing it in the homes of the higher classes. It was even seen in english landowning families, as can be seen by the portraits of the painter Thomas Gainsborough.

This breed even crossed the Atlantic. They owned by german immigrants and their successors until the First World War. For political reasons and the negative connotations of the word "German" they were renamed as "American Eskimo Dogs".

The first American Eskimo Dogs came to Germany and Holland some years ago to bring new blood to the closely related german lines. 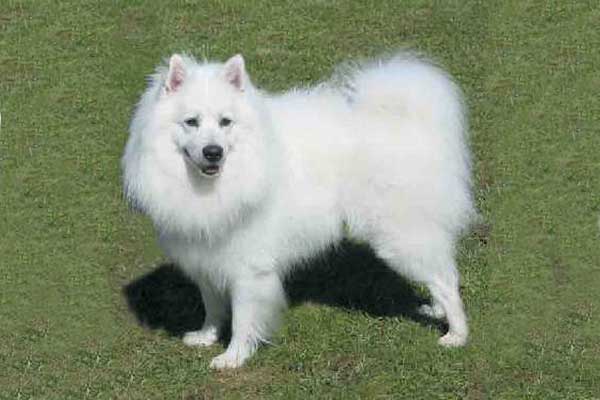 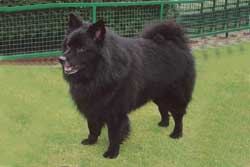 This variety of the Giant-Spitz originated in Württemberg. This breed was an irreplacable help in the vinyards. It ensured day and night that the grapes remained on the wine. In the daytime it kept birds and other animals away and in the night its dark colouring increased its effectivness against grape thieves.

It is a shame that today's vintners have forgotten their "Weinbergspitz", as it was called in Württemberg. Several breeders have tried to revive the breed by crossing it whith the white variety in the past few years. This has meant that compromises in the standard have had to be accepted.

Health
Giant-Spitz have been x-rayed for hip displacier for the past 25 years. Its anatomy means that the Spitz does not have a problem with this. All Spitzes are regarded as longlived and under normal conditions this can be expected. 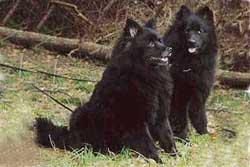 Grooming
All Spitzes have two hair layers: the soft undercoat protects against heat and cold, while the long hairs of the top coat are rougher and protect against rain and dirt. The undercoat is shed in summer and is easily brushed off during this time. It is not often that a Spitz need a bath, and even the brush should only be used so as to not damage the undercoat. Todays breeds of white and black Giant-Spitzes normally do not have a very long coat so grooming only takes a few minutes per day.

The valid breed standard can be downloaded here as PDF - or directly from the FCI site.